When controversy surrounds a subject it’s sometimes best to let the dust settle before crawling back into the fray. A case in point is the dust-up surrounding the Swiss brand Valais Mundi and its flagship red wine, Electus. From its introduction in 2013, to a recent series of press tastings, consensus has been hard to come by.

Is a Swiss icon wine even necessary? If so, what grapes should it contain and how much should it cost?

Electus was conceived for the export market in a world deprived of Swiss wine. With an initial launch of 24,000 bottles (2000 cases) and a price of CHF 249, it was aimed squarely at the luxury market. It’s a segment that has proven attractive to many others, including LVMH, which is building its Chinese super-brand, Ao Yun, from scratch; Constellation Brands, which is abandoning the mass-market for the luxury market with its purchase of Schrader Cellars; and the mega-diversified Stan Kroenke, whose purchase of Screaming Eagle adds a new beverage alternative for the well-heeled at his several sporting venues. There are literally dozens of luxury cuvées to choose from, with more on the way — so why not one with Swiss roots? It’s not as if the Swiss are out of their element in the luxury market.

What may be discombobulating to those who view luxury goods in terms of micro-production is that Electus comes out of a large cooperative; albeit a top cooperative with prime vineyards, winemaking know-how, and up-to-date technology. While the Valais Mundi program has been in the works for a number of years — begun under a previous regime that included longtime enologist Madeleine Gay — it is being aggressively marketed at a time when Provins is going upmarket with several of its other brands.

Which brings me to my point: It appears the criticism of Electus is as much about the audacity of the program as it is about the wine. 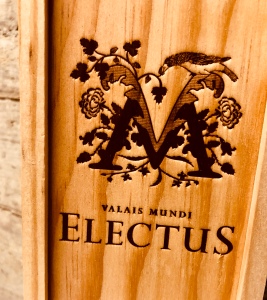 A perfect example is from its most vocal critic, the Wine Advocate‘s Stephan Reinhardt (Interim End of September Issue, 2017), whose scathing review of the 2013 called out both the producer for making “fake wine” and the “corruptible palates” (critics) who enjoyed it. Wow! Never mind that his employer was a champion of “fake wine” back in the day: remember high-octane Aussie Shiraz, Bordeaux garagistes, cult Cabernets from California and the early embrace of the super-Tuscans.

“The most thrilling red wines of Tuscany are the designer show wines that are being made by Tuscany’s most innovative growers. They can be 100% Cabernet Sauvignon, 100% Sangiovese, or a blend of these two grapes plus Cabernet Franc. Even some Merlot, Syrah, and Pinot Noir can be found.  They are usually aged in mostly new French oak casks.”  Parker’s Wine Buyer’s Guide—6th Edition

Pierre-Emmanuel Buss, in his blog L’Esprit du Terroir, is slightly more circumspect in his criticism. His (loosely translated) bottom line: If you’re going to call your wine an icon and charge top dollar for it, then you better deliver a top-notch product. He goes on to praise everything that isn’t the 2013.

There is also a cohort from the Lausanne and Zürich press tastings who tell me privately that the Electus concept is forced and unfocused —  that there are too many consistency issues stemming from an unmanageable number of parcels (40); too many grape varieties (7); too much terroir-defeating new oak (80%); and too much reliance on international varieties (4).

There is, however, a sizable contingent, including Yves Beck, Paolo Basso, Richard Kershaw MW, Chandra Kurt, Jean Guyard and Alain Kunz, who found the 2013 more than held its own against the competition in Lausanne and Zürich. This is after Jancis Robinson‘s positive review of the 2011 in her newsletter.

Quite a divergence of opinion, I’d say.

While Electus purports to be a vin de terroir, the first two vintages (2010 and 2011) are unabashedly international in style. That should come as no surprise since Valais Mundi tapped Nicolas Vivas, a Bordeaux-based enologist with an expertise in oak élévage, as consultant. As nice as those wines are — and they are nice — the need for another international wine that pays homage to Bordeaux is questionable.

My own comments to the Valais Mundi representatives and assembled tasters is one I repeat here: A Swiss icon should be about Swiss grapes and Swiss grapes only. I liken the first few vintages of Electus to beta testing where the brand is put through its paces and presented to a focus group of professionals willing to take a stand. Unfortunately the astronomical asking price for an untested wine brought with it a host of unwanted issues and some harsh criticism. I wonder how the discussion would have gone had Valais Mundi offered the 2015 as its maiden release; with the very promising 2016 and 2017 right behind it and a solid roster of native and near-native (Syrah) grapes at its core.

The purpose of the tasting is not only to evaluate the relative position of Electus versus the best from around the world, but to assess its positives and negatives and to chart a course for refinements in viticulture, processes and philosophical direction.

And I think that’s what has happened. At least that’s how I read the room following the blind tasting in Lausanne in August 2017 and at a follow-up vertical tasting at the Castel d’Uvrier in October 2018.

Since then, several criticisms have been addressed:

(1) The price was lowered almost immediately to CHF 190, and soon thereafter to CHF 150, where it stands today. This is a price that can be justified given the heroic practices required to work many Swiss vineyards. It’s up to the auction market to determine whether Electus is to become a collectible and worthy of a higher asking price.

(2) More importantly, the number of varieties available for blending has been pared back with Swiss natives taking the lead. Hence forth, Cornalin and Syrah will supply the backbone for future blends. The Bordeaux varieties will be limited to cameo appearances, if added at all. This is an important change in direction. Cabernet is a variety that can easily overwhelm a blend, even in small doses, and the Bordeaux grapes add nothing to the Valais patrimony.

(3) While target production numbers are still in flux it is interesting to note that volume is down significantly from the 24,000 bottles in 2010 to 8,500 in 2015. While production will undoubtedly scale up, I applaud the initiative to get things right before the difficult task of marketing.

So, what about the wine? How good is it and what are its prospects for future development? These are my notes from the vertical tasting in October of 2018.

2017 (Barrel sample): This one has a dynamic purple color. Ripe blackberry and cassis leaf aromas that stand out even in a cloak of new oak. The flavors are sweet and rich with some black raspberry and fresh herbs. The texture is defined by medium-grained tannins and a furry, suede-like feel. Obviously very young and raw but with lots of potential. Very classy.

2016 (Barrel sample): This one has more ruby and is less opaque than above. The oak element is toasty and slightly more integrated. Texture is smooth and chamois-like with mulberry flavors and pronounced saturation. This is beautifully finessed and is already showing a very elegant side. Lovely and complete.

2015: Dense ruby in color. Closed down nose that is dominated by oak. There is more of an herbal side to this with dark berries and a stony quality. This is dense and a bit somber at the moment, but there is no doubting the quality material. Lots of freshness and vitality. Wood tannins are medium-grained and substantial. This should be excellent with some age and the first vintage in an excellent series of three. (30% Syrah/22% Cornalin/20% Diolinoir/18% Humagne Rouge/ 5% Cabernet Franc/5% Cabernet Sauvignon)

2014: Ruby/garnet in color. Very herbal, almost weedy aromas that verge on bug spray. The culprit is excessive reduction. Very tannic and not particularly balanced. The least successful vintage in my estimation. 2014 continues to be a problematic vintage for many producers. (28% Diolinoir/20% Cornalin/20% Syrah/15% Humagne Rouge/7% Merlot/6% Cabernet Sauvignon/4% Cabernet Franc)

2013: This has a more developed garnet color. Beautifully spicy nose with cherries, brown sugar and soft oak. The palate opens with some fresh green leafy notes with more ripe cherries and sweet spices. There is a subtle bit of meaty decay as well which I found attractive. Aggressive tannins dominate the finish at the moment, so the question is, will they ever soften. (35% Cornalin/28% Humagne Rouge/18% Diolinoir/9% Merlot/8% Cabernet Sauvignon/2% Cabernet Franc)

This continues to be a highly controversial wine. Quite a few people like it while others hate it. I, quite frankly, don’t see what the detractors see. I think it may be a one off that suffered from an absence of Syrah and from a very difficult growing season in which ripening across all varieties was uneven. In the context of the Lausanne and Zürich tasting, which included some mediocre Bordeaux from the 2013 vintage, it was able to stand on its own.

2011: Garnet in color. The nose showed off some nice red and blue berries with soft oak. There is considerable development on the palate which is expansive with sweet ripe berries, a savory green freshness, and a nice Cherry Herring finish. This is nicely balanced with modest tannins and moderate acidity. International in style that shows a bit too much respect to Bordeaux. (22% Humagne Rouge/21% Cornalin/19% Diolinoir/18% Syrah/17% Merlot/2% Cabernet Sauvignon/1% Cabernet Franc)

2010: Garnet in color. Mostly cassis and red fruit reinforced with softening oak. Broad and relaxed palate with some concentrated sweetness based on red cherry and dark berry fruit. Silky textured with some soft tannins and mild acidity. This is very good and not far from peak drinking. Very nice international style that lacks just a bit of Swiss mystery. (22% Diolinoir/22% Merlot/19% Cornalin/19% Humagne Rouge/18% Cabernet Sauvignon)

Somewhat lost in the Electus hoopla is the white grape version, Eclat, which has managed to avoid controversy given its reasonable CHF 75 asking price. This is wisely based on two grapes, Petite Arvine and Heida (Savagnin), from a manageable eight parcels of old vines. It offers the theoretical benefits of Arvine’s aromatics and minerality with Heida’s structure and weight. This is a wine that can be expected to age with grace while offering freshness and aromatic interest as a young wine.

As with Electus, new oak will play a significant role in its élèvage. As of now, the malolactic fermentation is blocked or partially blocked depending on the vintage. This could be a very interesting project with some very positive early results.

2016: Pale straw in color with hints of gold. This has a bit more development and is broader with some lemon, dairy and sawdust notes. There are pleasant candied flavors of lemon and a hint of caramel. Crisp finish is cut a bit short. Overall very nice but not up to the 2017. (95% Petite Arvine/5% Heida)

2015: Pale straw in color with hints of gold. Notable butterscotch notes from the oak with some fresh dairy and lemon notes. Warm year richness, glossy, with a green vegetative freshness. Fat but not overweight, rich and somewhat viscous. Just a suggestion of volatility on the finish, otherwise crisp and clean. (80% Petite Arvine/20% Heida)

2014: Pale gold in color. Some popped corn and pierre à fusil on the nose. Savory green elements (from the Heida) are pronounced as is the weightiness and texture. Slightly oily with a mineral edge. A compelling wine that is clearly distinct from the others. Perhaps a bit more meditative. (55% Petite Arvine/45% Heida)