The geek in me loves things that smell and taste of place. I think my brain is wired that way. That’s why certain wines appeal to me while others leave me cold. The same can be said for a few of my other favorite things—coffee, tea, olive oil, scotch whisky, tequila and honey. Notice I haven’t uttered the word terroir yet because most things, including wine, are more influenced by inputs, process and intent. But there exists a terroir component in many of these things and the more it shows itself, the more I like it.

Honey is first and foremost a product of the available flora. It is generally a pure or nearly pure expression of whatever the floral input is. Clover honey, for instance, expresses clover’s essence but clover is a ubiquitous floral species and not particularly expressive of place. Terroir expression can be muted in such cases. For honey to have any chance to express a sense of place it must first be of pure origin—mostly of one floral species and from a single, preferably unique, location.

This brings me to Madagascar and its incredible biodiversity, its unique honeys and the Swiss connection that brings this piece together.

In the first few decades of the twentieth century Madascagar was a significant source for tropical products including the cash crops of vanilla, cocoa, coffee and honey. Honey was its third most valuable export with 30,000 tons shipped annually. Most of it was harvested by ordinary citizens as a primary or secondary source of income. Many of them used primitive and inefficient beekeeping techniques grounded in tradition or were “honey hunters” who would forage, often unsustainably, in vast tropical forests.   Not much has changed since then except for the challenges of a deteriorating environment.

Madagascar even has its own sub-species of African honey bee known as Apis Mellifera Unicolor. It is distinguished by its nearly solid black color and is the only sub-species on the island. It’s an aggressive bee that seems to display floral preferences depending on where on the island it is located (see map below).  This is particularly important if one is seeking pure varieties of honey that may be expressive of place.

Today, between decimated native forests and the degradation of other habitats, honey exports have fallen to 3,000 tons annually with severe consequences to the micro economy. Once local ritual and dietary quotas are met, whatever honey is remaining does not go far. Because of this shortfall and the fact that part-time honey production can boost a family’s income by 50% the Malagasy government and concerned NGOs are scurrying to catch up.

Pest eradication is vitally important and is achieved through repair and preservation of native habitats—the devastating varroa mite is a current challenge to local bee populations. Programs to modernize beekeeping techniques are very much needed and when coupled with education can double or even triple current yields, so the stakes are high. Government efforts to streamline the paths to market, especially lucrative export markets, are essential and private investment must be encouraged.

NGOs can and do help in this process. The Slow Food Foundation is a partner in this endeavor and a staunch defender of bee populations around the world. Its Arca del Gusto project lists at least twenty varieties of honey in danger of disappearing including Madagascar’s Litchi and Mokarana types.

Another such NGO is Helvetas a Swiss non-profit based in Zürich which partners with Madagascar’s Compagnie du Miel—co-founded by Swiss national Arnaud Steinfels and Thibaut Delpon from France. Their company purchases honey from as many as 500 local producers who practice sustainable methods in some of the most remote places on earth. The prices they pay allow for local producers to reinvest in new hives or to even venture into upstream extensions or new businesses altogether. The very essence of sustainability and socially conscious investment.

My introduction to Compagnie du Miel was at a recent dinner party where an incredible mangrove honey was served with some French cheeses. The aroma and flavor of that honey was remarkable: dark, pungent, blackstrap rum-like with buttery diacetyl notes and dried flowers. It was amazingly complex and medicinal in flavor; very lightly crystallized but luxurious and melty in the mouth. It reminded me of a wine’s complexities reinforced by a highly perfumed, Bual-like finish. Salty notes throughout. A cigar-chomping, rum lover’s honey.

When I exhibited an obviously enthusiastic interest several other varieties appeared. My notes are based on this informal tasting. 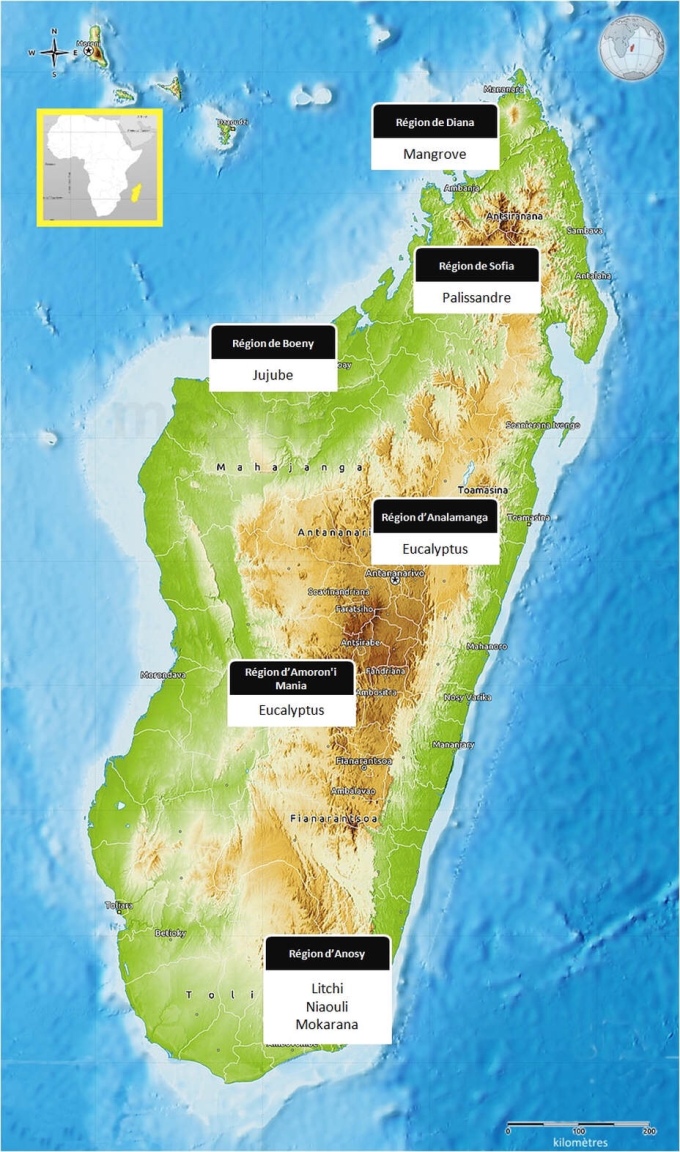 Miel d’Eucalyptus Robusta—(Eucalyptus robusta) A species native to Australia and brought to the island for commercial purposes. It is found mostly in the central highlands. Strong, almost volatile, buttery and feral notes. One guest described a “poopy” scent that I attributed to a subtle note of well-composted manure. Not at all unpleasant but it took me right to the wild place from which this honey comes. Fragrant with light caramel notes and a strong, floral honey finish.

Miel de Palissandre—(Dalbergia maritima) From the environmentally threatened Rosewood species. Hugely overexploited hardwood and therefore a rare honey. Dark with a distinct prune character. Recalls an old Armagnac with intense floral and spicy notes. Intense almost rancio flavors that would not be out of place in a sherry made from Pedro Ximenez. This is majestic. One to savor in espresso spoon amounts.

Miel de Litchi—(Litchi chinensis) Gravely threatened in Madagascar by climate change. Production has been falling in each of the last fifteen years. Slow Food’s Arca del Gusto has called out its tenuous existence. This is a very subtle honey with a notable rose petal fragrance and cooling mentholated notes. Very highly perfumed and exotic finish.

Miel de Jujube—(Ziziphus jujuba) An invasive species in Madagascar that threatens native forests along the entire west coast of the island. A very clean honey that nonetheless has some deep, slightly roasted flavors. Perhaps the simplest of the bunch but compelling for its creamy texture and melting presence on the tongue.

Miel de Mokarana—(Macaranga alnifolia) Native tree to Madagascar that is in danger of disappearing. Very exotic, creamy honey that is redolent of dried fruits and notes of apricot. Perhaps the most exquisitely balanced honey of the bunch and, unfortunately, the rarest. Beautiful caramel notes to finish. One senses the tropical forest in this one.

Miel de Niaouli—(Melaleuca quinquenervia) Found in the Southeast of the island within its silty, swampy confines. Bottle-brush shaped flowers are especially attractive to bees. This plant’s essential oil is a sought after ingredient in the perfume industry. It’s no surprise then that this is a highly perfumed honey with deeply fruity and somewhat woody notes. Not as complex as the others but reminiscent of a fine lowland Scotch.

Miel de Mangrove—(Sonneratia alba and Avicennia marina) Found in the brackish or salt waters of the Northwest coast. Mangrove swamps are currently endangered. Sustainable practices such as beekeeping and honey production help to preserve the environment. (See tasting notes above).

One thought on “Compagnie du Miel: Mono-Varietal Honey from Madagascar”